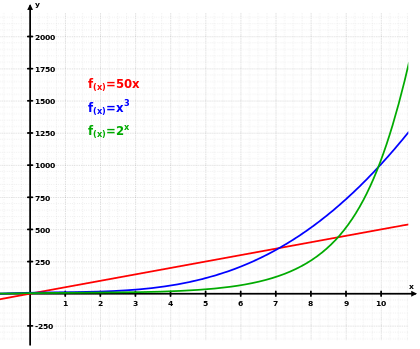 If the constant of proportionality is negative, then the quantity decreases over time, and is said to be undergoing exponential decay instead. In the case of a discrete Domain of a function of definition with equal intervals, it is also called __geometric growth__ or __geometric decay__ since the function values form a geometric progression.

where ''x''<sub>0</sub> is the value of ''x'' at time 0. The growth of a bacterial Colony (biology) is often used to illustrate it. One bacterium splits itself into two, each of which splits itself resulting in four, then eight, 16, 32, and so on. The rate of increase keeps increasing because it is proportional to the ever-increasing number of bacteria. Growth like this is observed in real-life activity or phenomena, such as the spread of virus infection, the growth of debt due to compound interest, and the spread of viral videos. In real cases, initial exponential growth often do not last forever, slowing down due to upper limits caused by external factors and turning into the logistic curve.